There’s been a really healthy, if vociferous, argument going around over whether or not to send a ‘welcome series’ of emails to new supporters on your non-profit or campaign email list. The concept is probably familiar: you send a pre-written package of emails over a few days or weeks to ease new people to your non-profit or political campaign onto your list. The pro and con go something like this:

PRO: By easing people onto the list and introducing them to our ladder of engagement, they are more likely to open, click, and donate later on. Good cultivation makes for better members.

CON: Other than checking for dead or spam-bot emails on your list, all a welcome series does is feed outdated content to members who otherwise have the highest-probability of being really active, engaged and excited. Why waste people’s initial enthusiasm with emails that aren’t about your hottest campaigns?

Well I LIKE a welcome series – dagnabbit. I’m old fashioned that way. But I was nervous about the impact on email deliverability. As I’ve chronicled elsewhere about email deliverability for non-profits and campaigns, there’s a real cost to emailing inactive members. And if all the welcome series was doing was turning people off or depressing the open and click rate, I didn’t want any part of it.

So, I set out to prove what a successful non-profit email welcome series is worth. What I found was surprising.

Our non-profit environmental advocacy client Environmental Action has been running a three-message welcome series for years now, but I chose to focus on the last 6 months of data. As you’ll see below, there’s plenty of volume here and the results are all statistically significant. The first message is a simple “hi, welcome!” with links to social media. The second changes every few weeks, but it’s always a top performing petition email. The third email is always a fundraiser; again the subject changes, but it’s something that performed well on a current campaign.

The rules of this particular non-profit welcome email series are simple, and probably familiar: Every new member who joins gets all 3 welcome emails, in order, about 2 days apart. So you get message one 24 hours after you sign your first petition, the second email 2 days later, and the third email 7 days after you joined (5 days after the second). During those 7 days, you’re not sent any other emails (usually). So while it’s possible to open just the second email and ignore the first and third, for example, most people act in sequence.

First, I checked the size of each of my three groups – these are counts of how many people opened (the basic metric of engagement) each email in the series. Later I’ll cross reference those openers with rates like click and action. Our Control is the total list of people who got the emails over the same 6 months – so it includes all three groups, plus a lot of people who didn’t open anything.

Here’s how that looks in chart form: 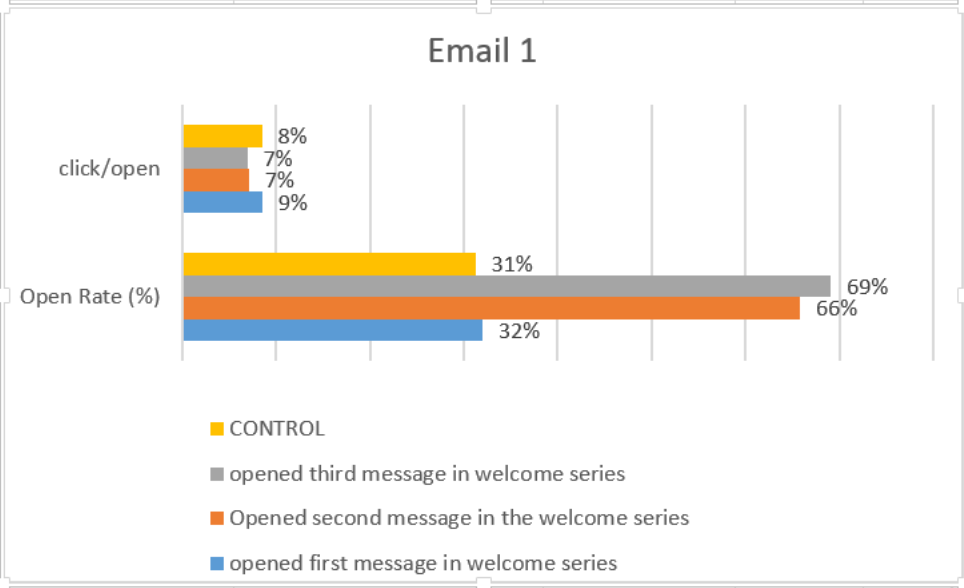 So this is telling us that if we send a simple email saying welcome, about 32% of people will open it and 9% will interact with the content inside. That’s a pretty solid open and action rate, compared to the industry standard benchmarks for non-profits.

But our broader question isn’t about the first email. It’s about whether sending people a welcome series makes them more likely to open, act or donate down the road.

Which brings us to email #2.There were two different variations on message 2, so I’m showing you the average of them. That’s why the control group is 92,338 here (even though the same ~160k people got an email, one send was larger. So we split the difference). Of those: 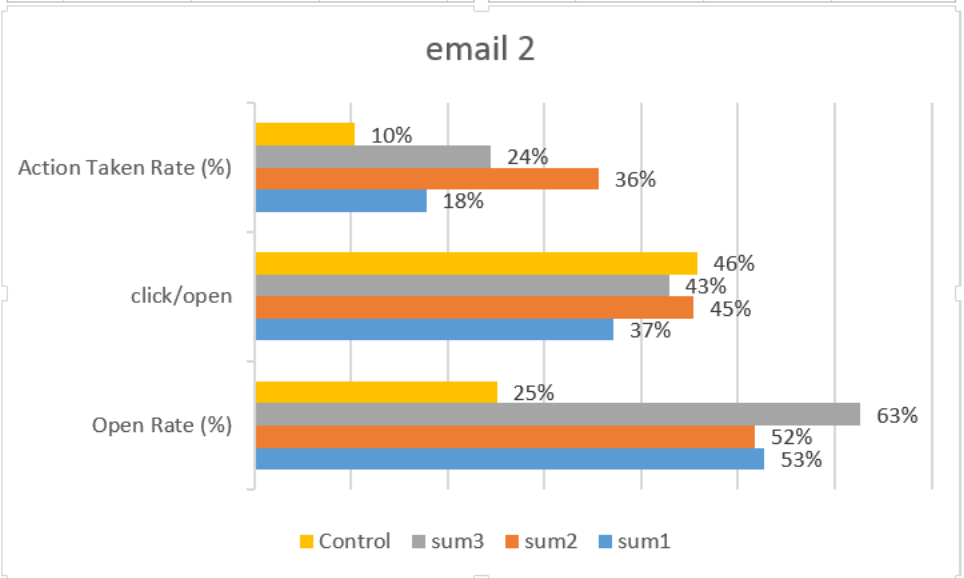 So this is where things are getting interesting, according to this – it really DOES matter that we sent people a welcome series. People who got and opened message 1 were twice as likely than the control group to open the next email, and 91% more likely to click on it and sign the related petition or action.

If I could offer you an innovation like a better landing page or email format that improved open rates by 100% and click rates by 91% – you’d jump on it. As it turns out, that innovation basically amounts to saying “hey” to new people on the list.

But it’s not clear that there’s a big benefit to the third email asking people for money.

Those stats look like this: Three different fundraising messages were sent as part of the welcome series over this six month test – the average size of the send was 63,889 records, and that’s what we’re using as our control. Of those:

But here’s the last, and most important missing piece – how do these segments (openers of emails 1, 2, or 3) compare to the rest of the population over the long haul? Does opening a “hey, welcome” email in your first 48 hours really make you more likely to donate, act or open emails 6 months or 6 years later?

You bet your get-out-of-spam-jail-free card it matters. Look at at this:

I mapped the total number of emails sent to our groups of Welcome series openers, and compared them to the “general population” of email recipients over 12 months. 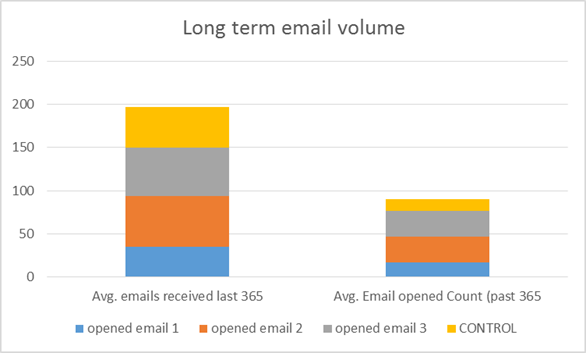 As you can see, the average member in each segment received about 50 emails in the last 12 months, with the control and 1st email openers a little smaller – since by definition the email 2 and 3 openers ONLY includes people who’ve gotten at least one email, and there are some people on the Email 1 and Control group who are so new they haven’t gotten any.

Now look at the average opens – see how the Email 2 openers are much more likely to have opened 10 or more emails in the last 12 months?

Conclusion: It’s worth it to send at least one, and probably two welcome emails to new members on your non-profit or campaign email list. The value of a third email that asks for money is not as strong – but taking an extra 48-72 hours to welcome new people to your list, clean out the junk emails, and acclimate people to your cool content is well worth the investment.

Ready to design or implement a great welcome email series to your list? Contact PowerThru today and we can help you develop or improve your email welcome series for your non-profit or campaign.