Ah, December… In addition to all of the usual stress the average person faces — wondering how to avoid putting on those extra holiday pounds, and get just the right holiday gifts without going into a “Santa Claus is Coming to Town is making me hate Bruce Springsteen right now” rage at the mall — the non-profit online organizer has another stress to deal with. How do you put together just the right series of end-of-year online fundraising emails and landing pages to raise a significant chunk of money from your supporters — who are hopefully in a giving spirit – or can be enticed, worn down or guilted into being so?

There’s a ton of strategies to accomplish that. But savvy online organizers know that the only truly good strategy is one that’s been tested to prove that it works better than other strategies with your particular list of supporters. Doing something like subject line testing to see whether one subject line or another gets more people to open your emails is pretty easy, and commonly used by groups with even small lists. Unfortunately, organizations often lack a large enough list size of former donors to perform statistically-significant tests to see what will make your former donors give more or less. (According to M & R Strategies 2011 eNonprofit Benchmarks Study, the average donation rate for non-profits on an email is .08%, meaning you have to email to tens of thousands of people just to get tens of donations — which is what you’ll need to see an significant difference from one approach to another).

At PowerThru though, we do have non-profit clients with large enough list sizes for us to do significantly significant tests. They were game for having us try to maximize their fundraising revenue, by testing our assumptions during the initial stage so we could use the approaches that proved to work the best for the remainder of the campaign.

What we wanted to test

1) It seemed obvious to us (and to many other organizations we think know what they are doing) that one of the best ways to get former donors to give was by including in their email a reference to the amount they had donated in the past, and to mention that they had not given this year but we were counting on them to do so. The question was — would that work, and increase both likelihood to give and amount given?

2) Everybody likes free stuff, right? The organization had previously produced a bunch of what is affectionately known as “schwag” (pens and such with their name on it). So we decided to offer those as a thank-you gift to people who donated. Would schwag make both past donors and people who had never donated more or less likely to give, and increase their donation amounts?

Skip ahead to read our conclusions, or continue to read the whole story about how we performed the tests.

How we tested it

First, we built a bunch of custom reports in Salsa that helped us pull the supporter keys and amount given by year for our past donors. That’s relatively easy to do (and if you either already know how, or aren’t a Salsa user and don’t care, click here to skip ahead) — build a custom aggregate report based on the donation table (and you might as well join it to the supporter table for a later step, although that’s not necessary), and then set up your columns so they include supporter_KEY, Transaction Date and Amount. Select the Group by Boxes first for supporter_KEY and then Transaction Date, and use the Function option to make Transaction Date be by Year and the Amount field calculate Sums. Save it, click Run and you’ll then see the total amount of donations each of your supporter has given by each year.

Or, actually, more than that. Because you’ll be including a lot of errored or failed donations. So you need to set up your Conditions tab to exclude donations that have particular Result and/or RESPMSG values. Those can vary depending on which Merchant Gateway you use and whether you also enter in a lot of offline donations into Salsa that you want to include in the giving history. My trick? If you’re not already sure what Result and/or RESPMSG field to filter out, re-jigger your report so that it is grouped by Result, then RESPMSG, and then either counting supporter_KEYs or donation_KEY. Run it and you’ll see the total number of donors or donations you got for each Result or RESPMSG and you’ll see you need to exclude things like Result = -10 and RESPMSG = Approved Testing. 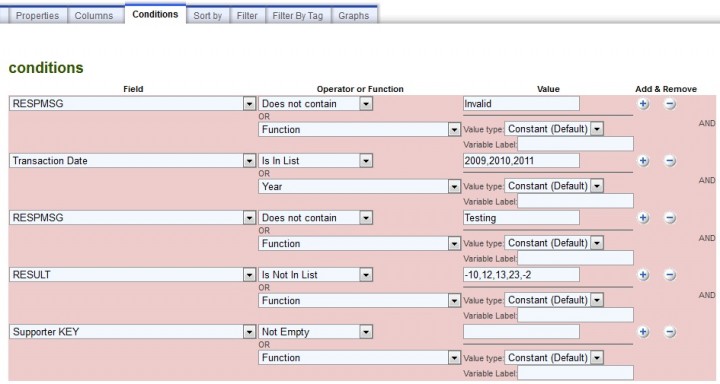 Note – if you’re scared by the Salsa report tool you’re missing a whole lot of the usefulness of Salsa! I have some online training videos on our blog, or you can read Salsa’s documentation.

Once we got the data, we exported it into Excel and then did some manipulation using filters and sorting, and then cutting and pasting so each supporter (identified by supporter_KEY) would have a series of columns with the total amount they gave in 2009 and 2010. (Still too detailed for you? Click ahead to see what we learned). Note we treated people who gave in 2011 differently — for them we got the average amount they donated per donation in 2011 so we could ask for them to make one more donation around that size). We then used used the “AND” function in Excel to compare the two columns to see which was greater (formula of “=AND(B2>C2)” will give you a “TRUE” for all supporters where the number in column B is greater than in column C and FALSE if not) and then sorted the rows appropriately. We then created two new columns where we multiplied the greater of those numbers by 1.5 and 2, since our strategy was going to be to ask people to give 1.5 or 2 times the amount they had given in which ever year they had given more. We then created new custom fields in Salsa for 2009 donation total, 2010 donation total, and 2011 ask amount 1 & 2, and imported that data back in.

Another quick Salsa aside — we had previously tried doing something like this using the Conditional Content feature in the Salsa email tool. That nifty feature allows you to create “SalsaScript” that does exactly what we had done using reports, Excel and custom fields — merge into an email a supporter’s total amount donated in a prior year and then multiply that amount by to get a new “ask” amount. The problem? When testing we found that there were some supporters who had negative donation amounts for the year, if they had received a refund in Jan for a donation they had made in Dec. While it was an edge case, it was going to look really silly to have people receive emails that said “You gave $-10 in 2010, would you consider giving $-15 or even $-20 in 2011?” So we went the extra mile and did the work manually, where we knew we could spot any errors like that and fix them.

Okay, enough looking under the hood at how we geeked out in Salsa and Excel. Back to more of a summary:

We then divided each of those sets into 4 different test groups of 25% in each group based on whether they were going to be receiving email with the different things we were testing:

Finally, we created 2 segments for the hundreds of thousands of non-donors we had on the list (since they had no giving history):

So, if you’re keeping track that was a total of 14 segments. But that’s what we needed to actually have this test work.

How we analyzed the results

For this experiment we were looking beyond simple things like open and click-through rate — we actually worked on minimizing those factors by making the email subject lines and content virtually identical (the only difference being the emails with “schwag” offers had a subject line and content calling that out). Instead we looked at:

In the end, while this was a lot of work it felt like work worth doing, because it taught us several important things:

– Your former donors are more motivated to give and to give more when you tell them what they gave in the past, remind them that they haven’t given since then, and ask them to please give again.

– Your new donors are the ones who are significantly motivated by a free gift, both to give at all and to give more than you are asking for. So start ordering little bits of schwag with your group’s name on it, but perhaps only get enough for your prospective new donors.

Jon Wheeler has wide-ranging skills and experiences from the nexus of non-profit organizations, technology and politics. He’s managed computer operations on Capitol Hill; as the field director for a state delegate re-election campaign in Virginia; helped a friend start an Internet company in his living room in Chicago; taught technology and social-entrepreneurship to high school students in Massachusetts; and co-founded Progressive Majority, a political leadership training non-profit in DC. He also served as the lead Salsa Labs support specialist for their largest clients with the most complicated needs.