Year end fundraising is a huge opportunity for most non-profits. A well planned drive drive at the end of the year can raise 5-20 times more (yes 500-2,000%+) than a ‘typical’ month. But you need to plan and prepare your drive carefully (more on that here on what really works for end of year online fundraising). It all comes down to this: asking exactly the right people for exactly the right amount of money at exactly the right time. So we’re getting together with some friends at Salsa Labs to profile one of the most powerful tools in your Salsa center for evaluating your best prospects and targeting year end emails: the Salsa scoring tool – and chances are, you’re not using Salsa scores right now.

Here’s an only slightly painful (in the awesomely technically specific) preview of what we’ll be talking about with Salsa scores. PS – can’t get enough of the Geekery? PowerThru resident Salsa genius Jon Wheeler has also laid out a more detailed, explanation of the complex Salsa scoring model below, and some other cool tricks for scoring. Check it out.

First off, Salsa Scoring is located in your supporter tab – if you need to turn it on you can request the package from your dashboard or contact support@salsalabs.com

Now, when you first open up the scoring tool and try to make a “new score” you may feel an urge to drink heavily. Listen to that urge. Don’t try and be a hero.

No really folks, it’s going to be ok … let’s just break it down a little more. There are 4 basic parts to any score:

This is what all this would look like on a graph – with each color line being a different member, the score tracking on the vertical axis, time on the horizontal. 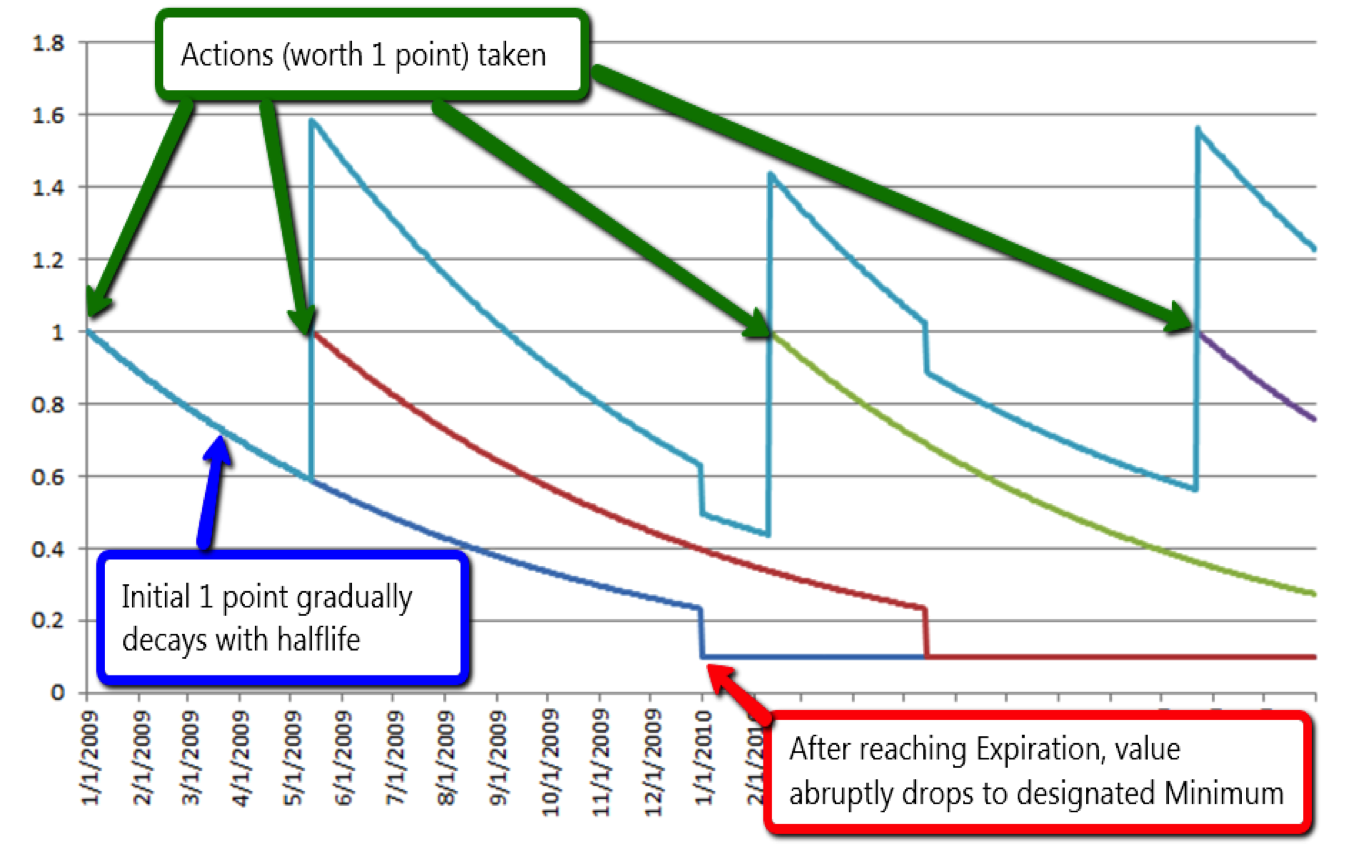 Ok, maybe not so much. So let’s show you 2 examples of scoring.

This is the simple example. Remember not to panic. Or feel free to have a drink. Maybe both… Here’s what’s happening on the screen:

And here’s the complicated version. You should now begin to panic.

First thing that makes this more clever and sophisticated – we’re using different scores to tell us about different kinds of actions. 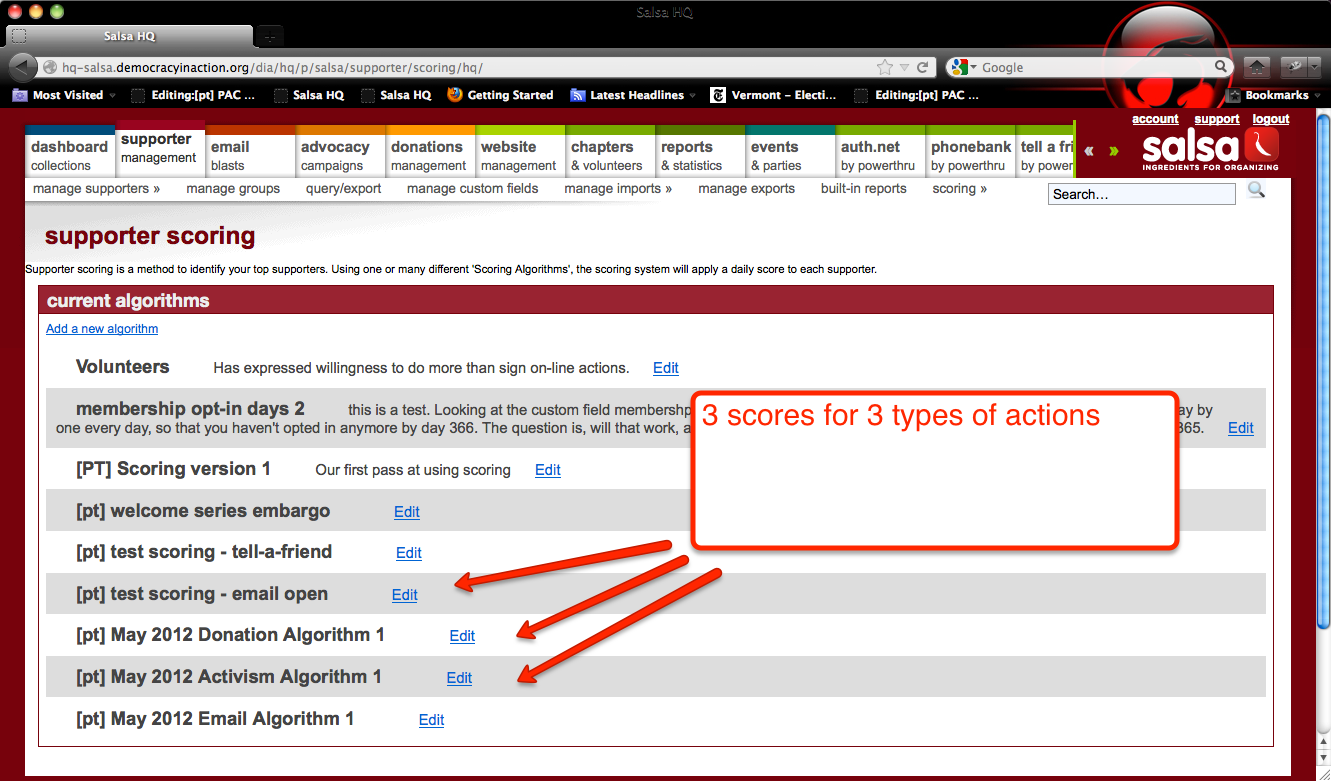 Instead of an on-off switch, this is like 3 dials that you can rotate to see what LEVEL of action people are at in one of 3 categories – Fundraising, Action or Email reading.

Why do you care? Because there’s a real difference between someone who signs a petition and someone who gives $10 a month. And emails that tell people “we know you have given before” or “we know you signed the petition, but you’ve never donated” are really really effective, especially at the end of the year when people are planning their annual giving. So let’s dive in a little deeper and look at that Fundraising score, for example. Here, each row is a different piece of the supporters donation:

Imagine it’s time for the year end fundraising drive, and you want to target supporters who’ve taken an action, but haven’t given this year. If you’ve taken time to set up an activism and a donation score like we show above, it will take you all of 45 seconds to target the exact right people in your email tool – or query them into an exportable file for your volunteer or paid phonebank. 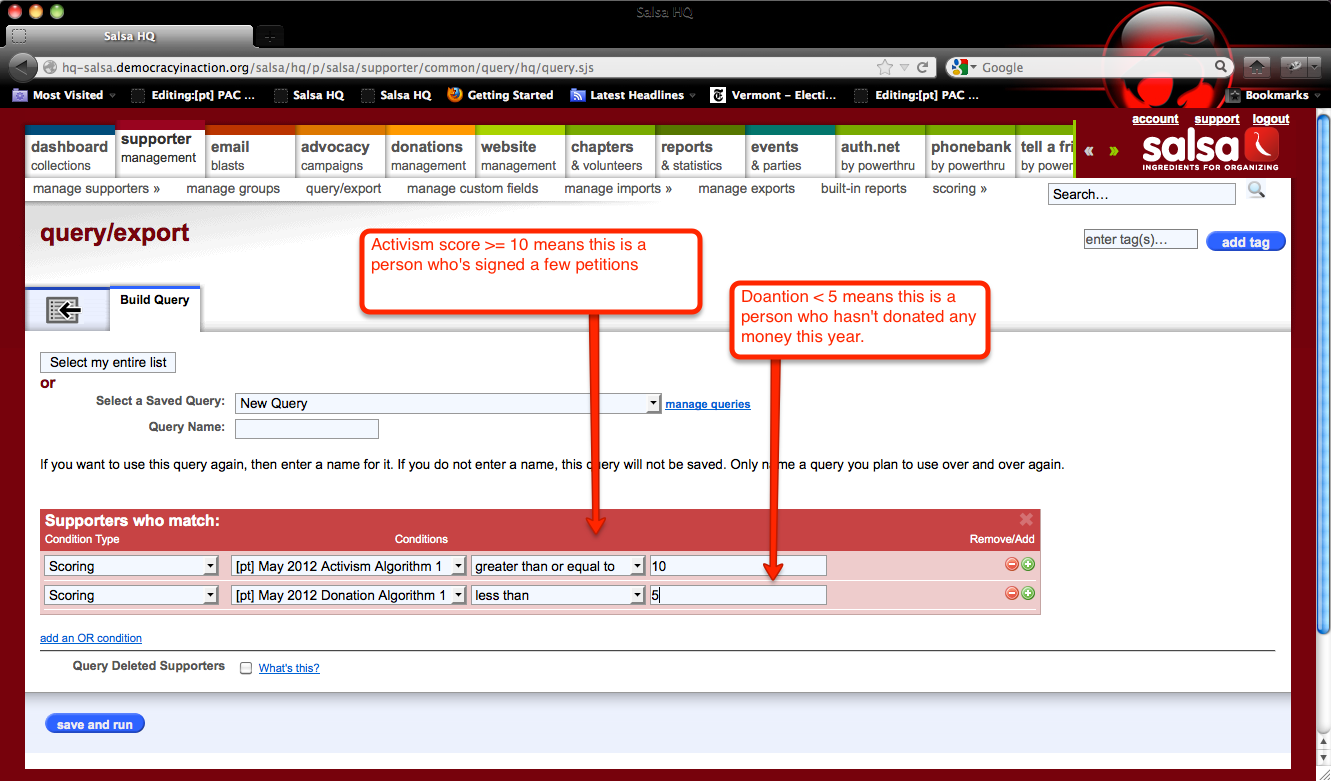 So to wrap up – Scoring is a slightly overwhelming tool, but it’s actually pretty simple. You need to set up a score for each KIND of action(the object) you value, and then assign each object a multiplier, minimum, expiration and halflife. Once you do – you just sit back and let the awesome knowledge flow over you until you’re ready to raise money or more precisely target your supporters.