At their excellent trainings, Upworthy advises not to share anything on social networks you wouldn’t want your mom to see. Like all their advice, it is very practical in nature: Facebook’s audience has long since left behind its college kid roots. Now most of its users and top sharers are middle-aged females.

Given that our client Environmental Action’s email list has a similar demographic, we were interested to see if that rule would hold true for email actions as well. So we set up a test of the list’s tolerance for something a bit less safe for work, namely this image at left: 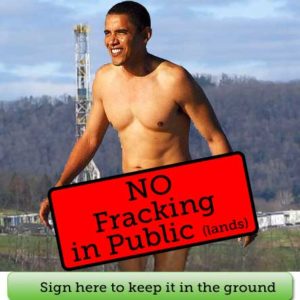 Our client was joining a broader coalition to gather public comments against the Bureau of Land Management’s rule on allowing the natural gas drilling method known as fracking on public lands. We wanted to create an image to accompany our email, that played on what the word “fracking” sounds like. Since the action was ultimately targeted at Barack Obama, we used his legendary attractiveness to juxtapose it with the ugliness of fracking in what was hopefully a humorous way (that’s a fracking well in the background, if you can’t tell).

We used similar imagery in the subject line of the email “Some things shouldn’t be done in public” and the opening graf and throughout the email:

“Some things are so dirty and dangerous they don’t belong in public. In fact, they should just stay underground. And you definitely wouldn’t like it if someone did them on YOUR land.”

Then we created a “clean” version: “This land is our land; don’t frack it” as the subject line, and this opener:

“This land is your land, this land is my land.” Public lands are supposed to belong to all of us—from the Grand Canyon to Liberty Island and lots of places in between.

We removed most of the “don’t frack in public” language, and provided a still humorous but less incendiary image. Then we tested, to about 8000 members each. Any guesses who won?

The clean version actually had a slightly lower open rate, but more than made up for that with a higher percentage of clicks — resulting in an extra 120 petition signers, which was our goal.

A few more observations: the unsubscribe rates were identical and low. One person did angrily write us they were unsubscribing because of the Obama image, but the rates were both around .01%. As for the “bit.ly” clicks those are clicks from people who were told about the action for a friend, either in email, Facebook, or Twitter. Neither of these actions were particularly viral, but people were twice as likely to click on the clean version in a share, which suggests it got shared more. (Indeed when I tested the two images as Facebook shares, the park sign was much more viral.)

The usual caveat applies that you would have to test this on your own list to be sure, but worth thinking about next time someone tries to claim that “only sex sells.”