If you want to win at the internet, your non-profit or campaign is going to need to capture some email addresses. And that means you’re going to need to get signatures on something like a petition or an action. Coincidentally, online petitions and actions can also be SUPER effective at creating political and social change.

But just starting a petition isn’t enough – you need people to see and act on that petition. And that means you’re going to need to post it on Facebook, where millions of eager people are just waiting to take action. HOW to get those petition signatures is less obvious. It’s a subtle art and precise science that we’ve spend years cooking up at PowerThru. Here’s the cliff notes version – for the real recipe, you’ll have to call us for a consultation.

Too much is never enough

The first thing you need to do, and be prepared to do, is post A LOT on Facebook. We’ve been testing at Environmental Action for about 9 months, and I’ve never found the limit on “too many” posts in a day or even “too many” posts in an hour. As obnoxious as they can be, big digital marketers like UpWorthy and private companies post literally HUNDREDS of times to Facebook each day. But if you’re like us and have a small staff, that’s implausible. So I suggest setting a goal of posting 3-5 times a day, or about 20 times each week. (Note this does not necessarily hold true for the smallest Facebook pages, where you could be clobbering your audience by posting that much and the drops you’ll get will outweigh any benefits. If you have tens or hundreds of thousands of fans though, it should be OK.)

Rates:
This is the part your digital department has been looking for. Our research says that, with the current EdgeRank algorithm in place, a “good” post should generate a reach of ~20% of your Facebook audience. For Environmental Action, with a Facebook audience of ~100,000, that’s a 20,000 reach per post to be considered ‘good’.

Out of that 20% reach, you’re looking for about 1% of the people who see the post click on it. Why one percent; Why not 70%? Well some of that has to do with the frequent posting. People aren’t engaging deeply with Facebook posts (spending hours reading and re-reading them, like they would a good book or movie, for example). They’re clicking, skimming – maybe signing, sharing and donating if you do your job right, and moving on in a few hours. Given the broad-but-shallow audience, 1% is a good benchmark rate to work off. It’s much higher than the number of people who see a SuperBowl ad, and decide to buy a beer because of it, for example. But it’s right in the middle of what you’d expect for an email alert to a big or cold list.

More to the point, our experience is that a reliable 75% of the people who click through to a landing page will take an action similar to signing a petition – if you follow the other advice below. Even at a 1% click through rate, that means you’ll be generating thousands, maybe tens of thousands of actions (and petition signatures) each week following this drill.

There is obviously lots of room for changes in the model. Having better images increases the reach and click through rate. Having more campaigns running at the same time increases the reach per post (since not everyone signs every petition, and having several at once increases the total number who sign something). Having a bigger list of fans to start from also means you get a larger reach per post. And of course, we should note that Facebook can and does change its algorithm, regularly.

You get the point. this is the model our samurai developed over the last few months, and it’s been pretty consistent on the reach and click through rates and % completion/new from there. 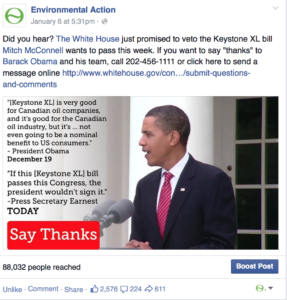 So what are you supposed to talk about?